Learn more about the company behind the AquaFinesse water care products.

For years, CEO and founder J. de Rijk of AquaFinesse has been fascinated by the topic of water maintenance. This is mainly done using filters and disinfection. There are different ways of disinfecting. For example, with chlorine. However, other countries also permit other disinfectants, such as bromide, peroxide, etc. But according to him, it should be possible to do this in a more environmentally friendly way.

After years of study and the perusal of scientific reports on the causes of water pollution, the researchers of Special Water in the Netherlands (AquaFinesse) established as early as 2004 that the real cause of bacterial contamination stems from the bacterial nursery. We call this the Organic debris. This discovery was revolutionary at that time because the role of biofilm was not clear until then. You will find Organic debris when, for example, unclogging drain pipes. However, this also occurs in the hot tub, spa or swimming pool. This is the layer of slime that adheres to the inside of drain pipes, among other things. This biofilm forms the bacterial survival and defence system. Here they live protected and can multiply unrestrained. It is even possible for legionella to develop in the biofilm.

This Organic debris is now recognised by scientists worldwide and causes billions of damage to industry, among others, every year!

99.6 % of the AquaFinesse users would recommend it to a friend!

It has been proven that this slime layer is impermeable to disinfectant. Bacteria that live in this biofilm are not killed. No less than 90% of all bacteria reside in this slime layer. That was the whole problem. How do you get at these bacteria when they are in an impenetrable slime layer? AquaFinesse researchers have found a solution to this problem.

The Netherlands and water

People from the Netherlands have always had respect for the power of water. After all, most of their land is below sea level. The Dutch storm surge barriers, dykes and polders are famous worldwide, as are the expertise of Dutch engineers in manipulating the water and its forces. Awareness of water, its use and respect for the environment are essential themes for Dutch society. This respect for water, the expertise and understanding of its properties and behaviour are deeply rooted in the psyche of Special Water Europe B.V.

What makes us so unique?

The solution mentioned above resulted in a unique product that addresses this Organic debris. The patented AquaFinesse formula soaks the Organic debris away from the walls and breaks it open. As a result, the bacteria enter the free water and lose their protection. Now you only need a minimal amount of disinfection to eliminate the bacteria. In addition, AquaFinesse forms a layer on the walls so that the Organic debris can no longer adhere. Bacteria can no longer adhere to the walls.

AquaFinesse also positively encourages disinfectants, as a result their consumption decreases significantly. This is better for the environment, but also for your health and especially for the skin during bathing. This is also the reason why many people with skin problems use AquaFinesse. You can feel the softness of the water that nourishes, maintains and does not dry out the skin. In addition, it ensures a stable pH. Visibly clear water and a fantastic experience!

Our products are now sold worldwide. And we are very proud of that! 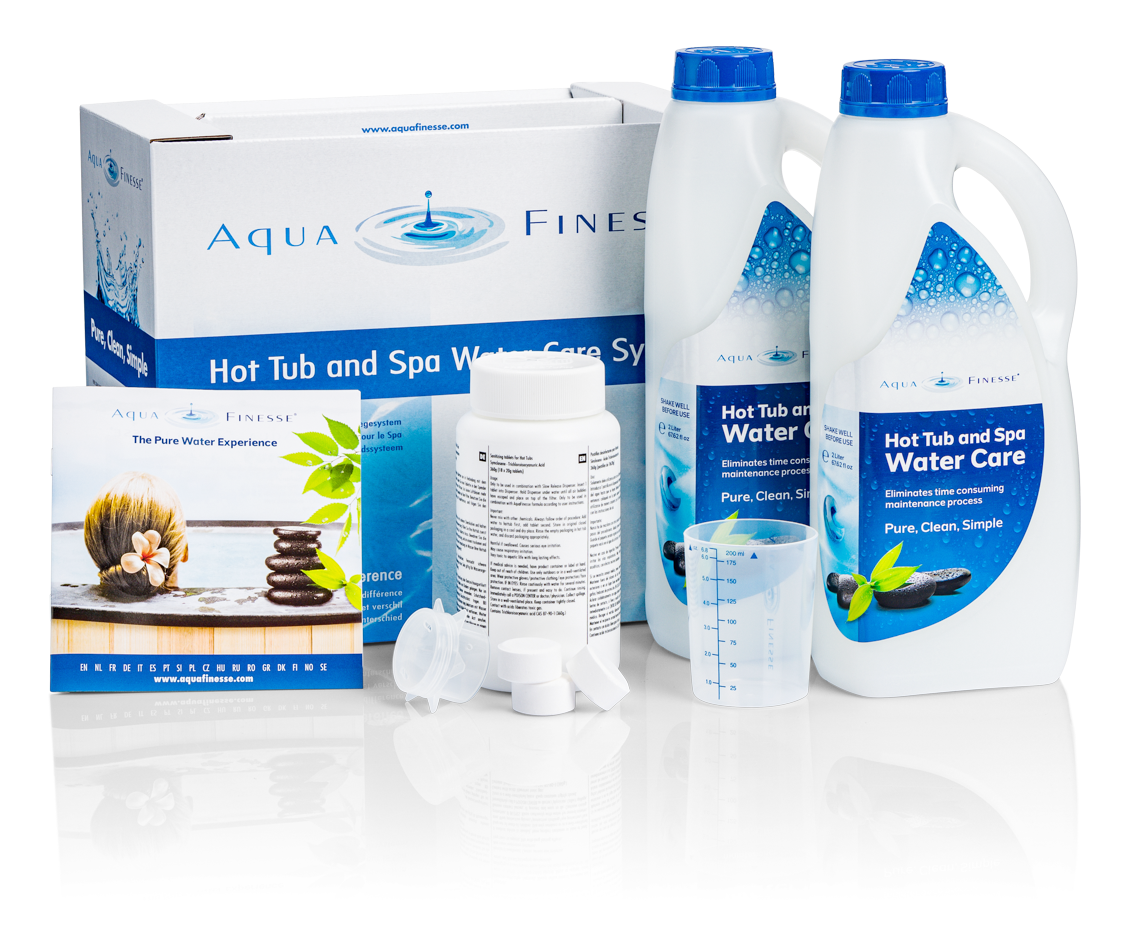 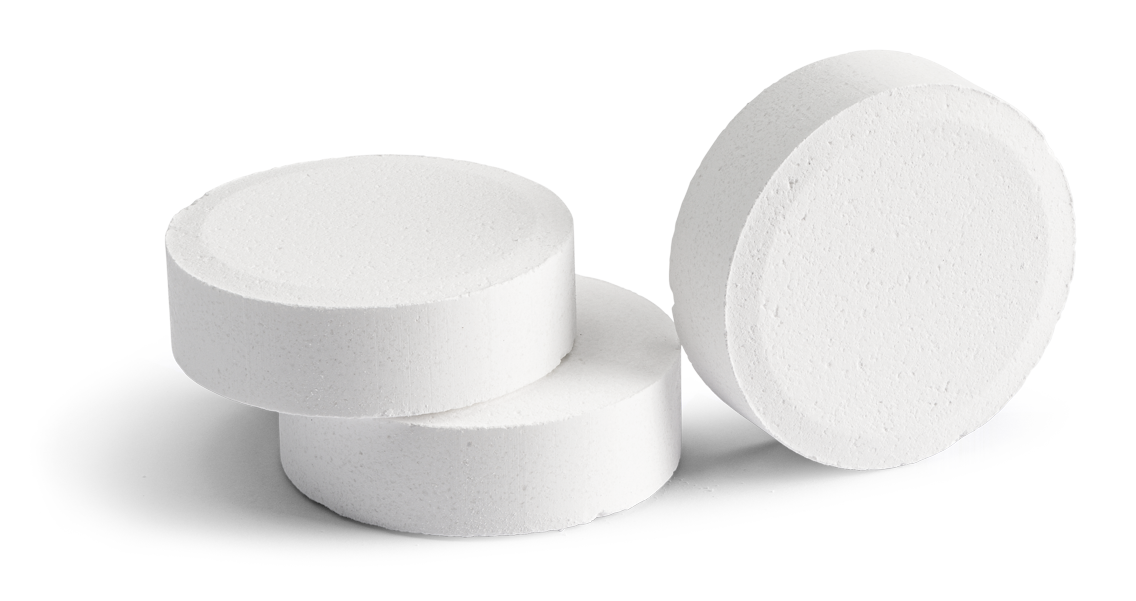 A refreshing dip in your favorite pool, the one at home!
Try our pool products and experience the difference! 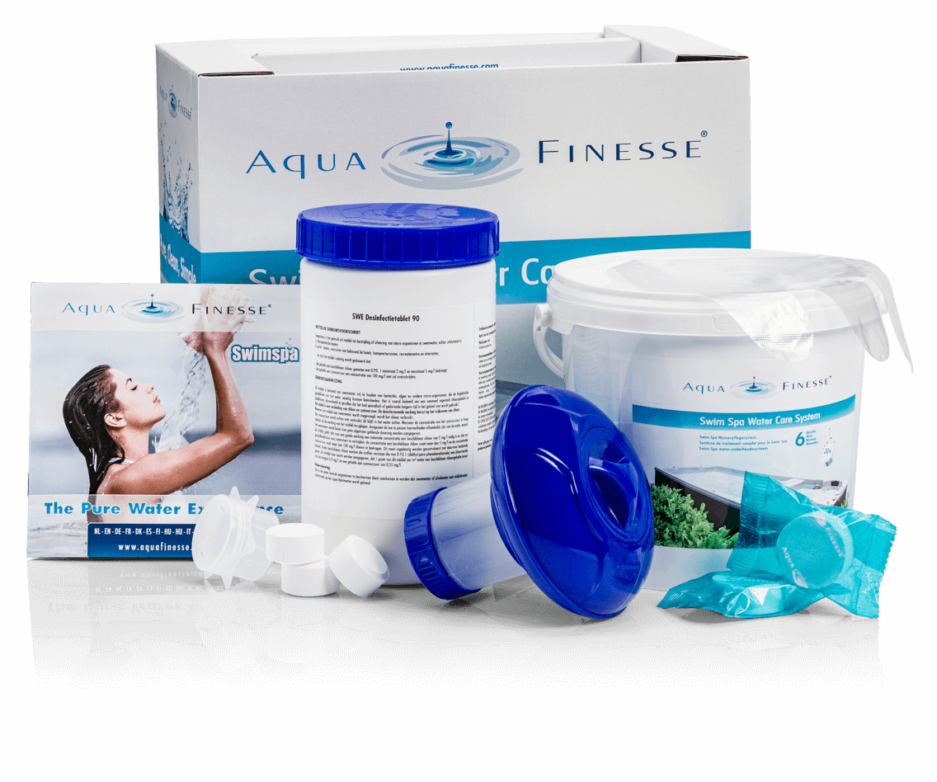 AquaFinesse has several products especially made for SwimSpa owners!

AquaFinesse has perfect products for your inflatable spa water care!